Dear Friends,
It has been noted that to be human is to be a creature of habit. The older I get the more this maxim seems to apply. Sometimes, however, we have to step out of our comfort zones for the sake of new knowledge and experiences.

On Sunday, January 23, I ask you to consider attending the noon Mass even if it isn’t the Mass you usually attend. As previously announced, our homilist will be Father Americo Santos, a young priest of the Archdiocese of Boston who was born in El Salvador. We will be commemorating the Beatification taking place this Saturday (January 22) of four Salvadoran martyrs, including Jesuit Father Rutilio Grande.

Julio Santos, a musician originally from El Salvador and currently a member of the Music Ministry at Most Holy Redeemer Parish in Boston, will be joining members of our Adult and Junior Choirs with his family to share some traditional El Salvadoran church music with us at this special celebration of Mass.

This is a unique opportunity for our parish to learn more about our patron saint, Oscar Romero, and about the issues he faced as a spiritual leader, advocate for social justice, and ultimately as a martyr. 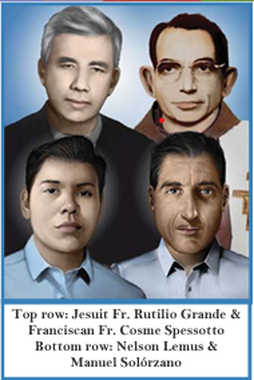 The beatifications of Jesuit Father Rutilio Grande, Franciscan Father Cosme Spessotto, and two laymen will take place on January 22, 2022, according to the Salvadoran bishops' conference.

All four were martyred during the country's civil war in the 1970s and 1980s, when innumerable Catholics began speaking out in support of the poor and marginalized, based on church teachings from the Second Vatican Council and the Latin American bishops' conference.

The killing of Fr. Grande, and his ministry in favor of the poor, inspired and instilled hope in St. Oscar Romero, who was then the new archbishop of San Salvador. He was martyred three years later, on March 24, 1980, while celebrating Mass. Romero was martyred for his open criticism of the military and efforts on behalf of the underprivileged of El Salvador.

The two priests attempted to foster a sense of community among the impoverished in the country, who were routinely exploited by the oligarchs. However, their sermons, such as St. Romero's, were frequently rejected as political rather than being based on church beliefs instructing Catholics to care for the poor and underprivileged.

Pope Francis has long expressed his intense admiration for both Grande and Romero.

“I was a devotee of Rutilio even before coming to know Romero better,” Francis told Central American priests during a recent visit to Panama. “When I was in Argentina, his life influenced me, his death touched me.” “He said what he had to say, but it was his testimony, his martyrdom, that eventually moved Romero,” Francis said. “This was the grace.”

“We give thanks to God and to Pope Francis for this immense blessing: the elevation to the altars of these four martyrs from our country,” said the statement from the Salvadoran bishops. A miracle must normally be credited to a person's intercession before he or she can be
beatified, while a martyr does not require a miracle. A miracle is required after the martyr is beatified before he or she can be canonized as a saint.

In honor of the beatification, on Sunday, January 23 at the 12:00 PM Mass we are pleased to announce that Reverend J. Americo Santos, who serves as Parochial Vicar at Holy Redeemer Parish in East Boston will concelebrate Mass and serve as the guest homilist.  Fr. Santos is a native of Agua Caliente, a town in Chalatenango, El Salvador.

Santos noted that he is very much inspired by St. Oscar Romero. "I look up to him -- to his dedication to proclaiming the Gospel, giving witness in his life, not just with his words," he said. "He always was defending the poor -- that's the kind of priest I want to be. Someone who isn't afraid to speak up for the poor, who lives the Gospel in the flesh."